What is now Glendale Farms, Inc. began with the purchase of a small dairy farm in 1893 by E.W. Zell and his wife Katherine who emigrated to America from Germany. Zell’s daughter, Myrtle, and her husband, Paul Kluth, later took ownership of the farm, maintaining a dairy herd, and raising hogs and laying hens. Paul and Myrtle’s son, Glenn Kluth, and his wife Beatrice were the next owners. They specialized in an expanded dairy operation and no longer produced hogs and chickens. In addition, Glenn did custom combining. Glenn and Beatrice’s son, Dale Kluth, and his wife June later took ownership of the farm, further expanded the dairy herd, and also purchased neighborhood farmland to add to their land base. In 1977 the farm was incorporated as, “Glendale Farms”. 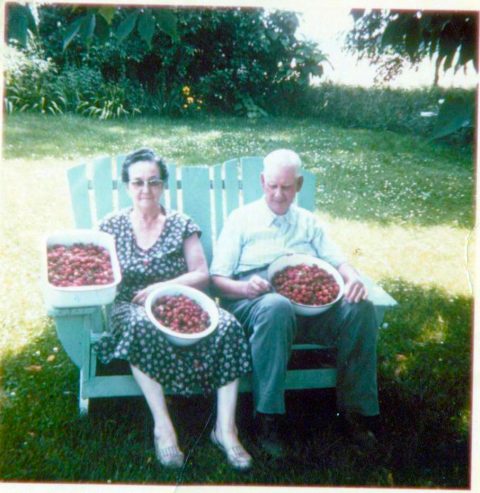 In 1978, Dale and June made the decision to grow strawberries and began with an eight acre parcel which ultimately expanded to twenty five. Shelling peas, sugar snap peas and snow peas were later added as products available for their customers during the strawberry season.

In 2004, Dale & June retired and the farm operation was taken over by their son, Steve, and his wife Tammy, the fifth generation on the farm. They added green beans and yellow beans to the U-pick business. Their three young sons also participate in the business by growing and selling onions.

In 2005, Steve and Tammy built a modern free stall barn and milking parlor to expand the dairy herd to 210 cows. The old facilities were remodeled to house the young stock. The farm now comprises several hundred acres on which corn, alfalfa and soybeans are produced to feed the dairy herd. Wheat is also grown as the source of the straw which is used to cover the strawberries for the winter protection. Dale and June live nearby and continue to help with the strawberry operation.